You Are Here: A Compilation Of California Electronics (vol.1) 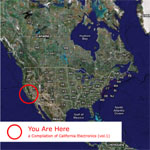 You Are Here: A Compilation Of California Electronics (vol.1)

Uploaded by Connexion Bizarre on November 17, 2008